Shooting Chad Lucas's truck for the cover of Lowlife Video was a hell of an adventure. To understand why, and really have it in perspective you would have to understand where I live in accordance to where lives and Aaron Ihas shop is. The reason why is we met all those involved in this shoot in the area, but I live in the area which is a bit of a drive. After meeting there I realized that Truckin' was also shooting a truck at the same time as us. Why were we shooting together and all that I have no idea but we were. We also had a guest, Makoto Akamura from Trucktrends magazine of was with us, and he always makes every situation more interesting. 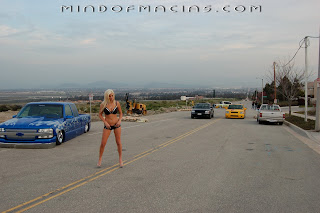 Chads truck, STK TRUK, and the Desert Dragger can be easily seen in this shot, but also notice the Chassis by Aaron truck in the background being shot by Truckin'
So as the day wore on, we finally jumped into the rides and headed off to the shoot, we were shooting Chad Lucas's truck for the cover of The Borrachos DVD and Truckin' was shooting Aaron Ihas Tundra for the cover of Truckin'. When we jumped on the freeway I had no idea where we were going but I was very surprised to see that we were running out of light because we were driving kind of far, and we were driving back towards my house. I thought to myself, why the hell did I drive all the way to LA, only to end up back in my hood? Just part of the madness of these shoots, but at least I knew we had a hot model lined up and just hoped she would be on time which she was. 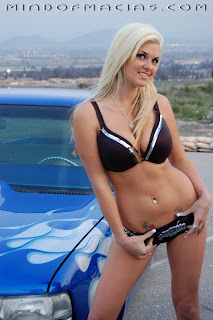 We always used some of the hottest models available, this model was provided by Gil Luna from Tailgate Magazine.
As we drove all over Rancho Cucamonga trying to find our location I remember that everybody was worried we would run out of light so we scrambled like crazy trying to get situated.
Once on location we started shooting, Lowlife Mike was filming, I was doing nothing as usual so I started taking background shots and Chad Lucas was shooting his own truck. I don't know why I always took background shots. We didn't need them and we didn't use them, but I'm really glad I did or else I wouldn't have this material today. I don't know if I was practicing my photography or just taking pictures of the pretty girls. But I'm glad I did it. Check out some of these shots and click the link below to see them all. You will notice that some of my shots are blurry and that's because I shot them hand held in lowlight. I never thought I would need these for anything and therefore didn't use a damn tripod. 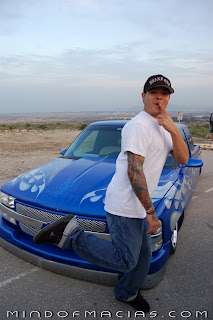 Ok, sometimes the models were bad!

And sometimes they were even worse! (Whats up with those shoes?!?!) 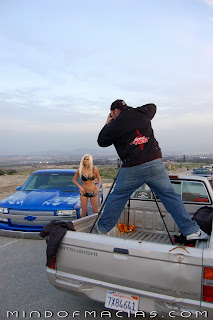 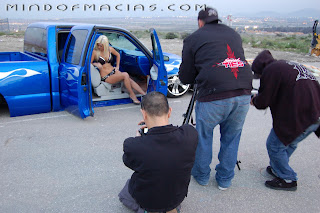 Such a hard job, but somebody has to do it. 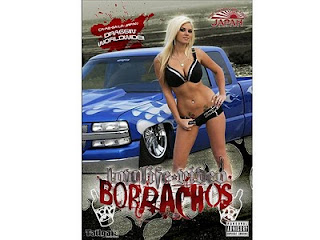