When I first heard Los Boulevardos was hosting a bbq and show, I was pretty pumped. I love the style cars they build and their attitude as a whole. I was expecting a few cars and some cool people but I was blown away to see a ton of cool rides in the park the morning of March 5th. 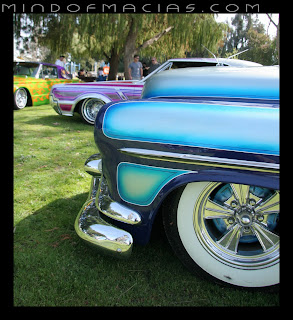 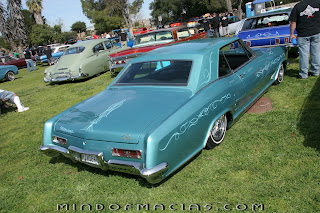 For me this wasn't going to be an average Saturday cruise in my 72 Monte. My morning started early, 6 am. I woke up early because I knew it was going to be a long drive to Van Nuys from and I was going to make a quick stop in to pick up Jimmy. Jimmy had been drinking until 4am, I knew this because of his text messages to me and his Facebook posts, so I knew Jimmy would be in a world of hurt, but I also knew he's still down as shit anyways. Steve showed up to my house on time and we hit the road to pick up Jimbo. When we got to Jimmy's house he was passed out on his couch, drooling all over it but he sprang right up and after only two hours of sleep and jumped in the back seat. "I didn't even brush my teeth!" he says, "ah, fuck it." 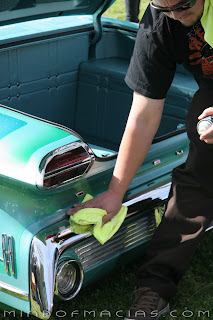 Doing about 85 mph we got to the show in less than two hours, not bad I thought. When we rolled in the first car we see is Roger O'Dell's bright pink 57 Cadillac. I knew we were in for a treat. Right a way a friendly face comes up to me an says I can park anywhere I want, the grass or the parking lot. My car being a daily and kind of beat I opted for the parking lot, I hid in between an old 70s suburban close to a PT cruiser. That might have been the only car that I was shocked to see. But hey, they apparently don't  discriminate. 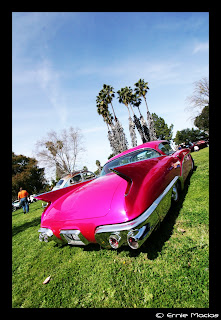 As the day went on, people were bbq'ing (made up word) throughout the park. Carne Asada was in the air. We started getting hungry and that's about the time the LB guys started up the grill for their free BBQ. Because the BBQ was free I decided I would donate to the raffle by buying as many tickets as I could since all the money was going to charity.  That ended up paying off for me, I won two raffles including a bad ass skateboard. All in all, to me the day was a huge success. Jimmy, who slept for half the show in the back seat of my car, Steve and I had a great time, it was worth the drive and bottoming out my car on the 101 over and over again. I can tell you that if they have it again, I know I'll be back and next time maybe I'll bring a few more friends along. I know they had some hot dogs left over and I know a few fat kids that will help with that.

Thanks to all the Los Boulevardos members for the great time! Click the link below to see a few shots from teh show 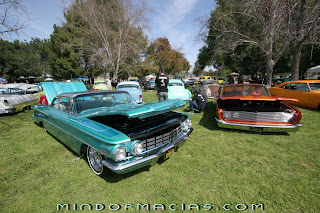 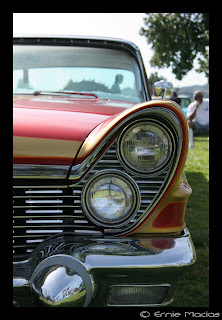