﻿
﻿ Back in or around 2000 i went with Max to see an old friend of his. Max was dropping off some caddy parts and suggested I go with him because I would love the place. When we got there, I was amazed to see that their was about 50 Cadillacs or more on this guys property. Immediately I fell in love with a 66 Coupe that was sitting under an Orange tree. I was drawn to it. I didn't say anything at first but just before we left, I asked him about the car. "That thing ran about 14 years ago but it had a bad tranny, we parked it until we could fix it." Well it never made it out of that spot, to my surprise the new tranny was already sitting in the trunk for the car. I was even more surprised on the price, $800!! Of course this was way back before the whole Cadillac craze. I had to have it, I told myself.
﻿
﻿﻿ 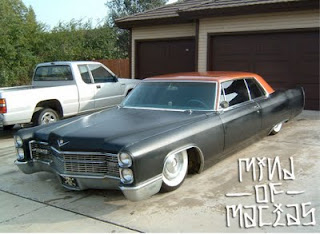 Over the next few weeks, I saved and saved, and even borrowed money from my WIFE (That word is big and bold like that because it originally said "girlfriend" then my wife flipped out and made me correct it because apparently we were married when I bought the car lol). I finally had enough money to go out there and get it. I took it home and it sat in my driveway for about 6-8 months before I was finally able to get it running. It ended up needing a carburetor and the transmission and it then ran like a champ. I drove it all patina for about six months, just lowered on some wide whites. One day I ended up working out a deal with Max for some trade work. I traded him a 92 Acura Integra LS for an air ride setup and a paint job on the Cadillac. At the time I think the only one I had ever seen around was Kurt's from Severed Arizona and the one that Max had. I had owned a Cadillac before but not bagged. Boy did I love that car.
﻿ 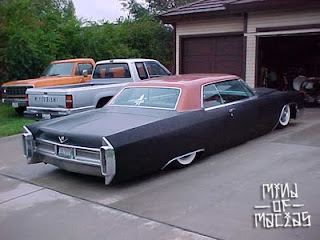 I ended up blowing a head gasket and parking it for almost a year, fixing it then selling it for $7,000. I tried to buy it back several times with no luck. The unique thing about this car is that while it was at Max's I had him install 65 Cadillac rear bumpers and lights. It's not exactly a direct bolt on mod, but almost. Their is some slight modifications that had to be made. It was the first of it's kind. Of course we shaved off a few goodies also. The car ended up getting painted white, I saw it about six years later, and of course, tried to buy it back. 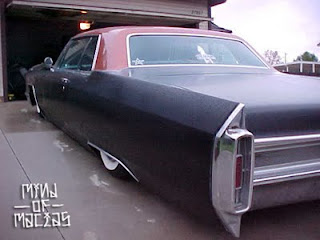 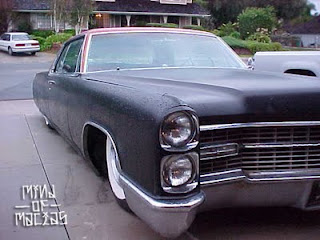 ﻿p.s. My buddy Brian just reminded me that He was one of the dudes that helped me pick up the car. I didn't remember that part of the story because after all, I am getting old!
Posted by Ernie Macias at 9:54 PM