This picture you see below is the shot that ended up as the cover to Lowlife Video Pendejos. The shoot took place with Dayna Delux in Lancaster Ca. I shot the pics in the same spot as I shot the same truck for the cover of Mini Truckin' Magazine. This was easily the most fun shoot I ever did considering I was a nervous wreck. Dayna was awesome to work with, she knew how to pose and really work the camera. The funny thing is I had shot covers for Tailgate and Mini Truckin' before, but I had never shot a cover for Lowlife, so I was freaking out. Plus this cover included one of the most recognized car models ever. ﻿
﻿﻿I remember thinking as I was shooting and looking through the View Finder just how amazing it was that I was shooting with Dayna. I absoloutely love her work and I thought shes was completely gorgeous. She had a great attitude and a bright smile. It's hard to imagine that the shoot almost didn't happen. Originally we were supposed to shoot it with Sabina, (20th anniversary cover for MT mag, I also shot) another famous pin-up model but we couldn't make it happen. Luckily for us, my homie Josh knew Dayna from going to the bar she worked at and was able to set this up.
﻿﻿ 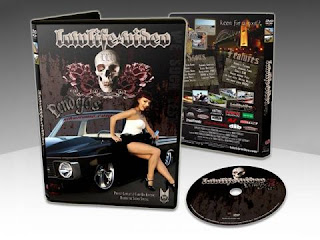 Shooting the flame shots was nearly impossible because I was shooting a girl, and a truck shooting flames all at once. I'd say I took about 300 of those shots. I didn't actually need them, I only took them because Lowlife Mike was filming the sequence. But they ended up being pretty cool. 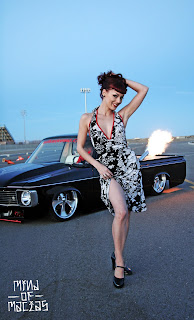