I recently picked up a 1963 Impala. It's not much of a car, more like scrap metal right now, but I'm already making the moves to make it one of my coolest builds yet. 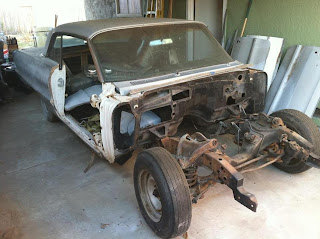 I don't know much about the car other than it was channeled by Mr. Bob Grant himself from Grant Kustoms in Oroville, California. At some point it ended up in the hands of my homie Ben Da Pirate where it's been sitting for a few years.

As far as my plans for now i simply plan on getting it assembled and in one color. A buddy of mine and club member Dennis Sayers aka Yankee has agreed to put it in primer for me. But if things are feasible I might just have him spray it in white. As of now I don't know if I want to put it on some tru spokes, cragars or supremes. I know it will definitely have that old school flavor though. One of the few spots that will need some immediate attention is the interior because as of now, it has none. I'll be looking for some T-Bird rear seats and some swivel front seats.

As I searched on the internet for 63 Impalas I found this little gem below which is definitely what I could picture my car looking like in the near future. 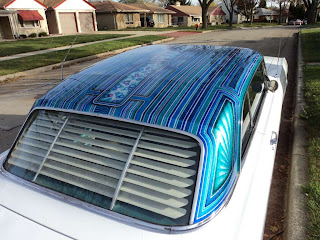 Hopefully I'll have my hands on this car by mid this year or sooner. As soon as I get my hands on it, I'll be sure to post some pics.