A Look Behind the Scenes with Lowlife Video.

Ok, so I'm obviously not going to be able to write a blog everyday that pertains to something cool, but because I recently found some cool pictures I might as well share what I got.

While looking through a hard-drive I came up on a folder labeled LLV; it's full of totally random and awesome pictures from shoots and what not. I know I won't be able to post them all, but I did find a few that I will be sharing over the next few months. After all what's the point of blogging if not to share with the world. Now, I'm not much of a writer, more of a talker but I'll do my best not to bore you with thousand word blogs. We'll just get right to the pictures. 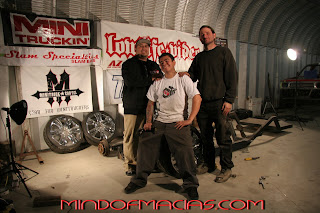 The first picture here is from a clip we did for Lowlife Mikes truck that he was building at the time at Bio Kustumz. "Project Lowlife" it was dubbed. I'm not even sure which lowlife it was in, but it might have been Borrachos. Don't quote me on that. We went to Bio Kustumz to shoot that day, actually I think Mike was living there at the time. So I went there. We set up early because we knew we were shooting with a girl that day. This girl (I forgot her name) was a friend of Max Fish the owner of Bio Kustumz, which I'm sure you all know; very pretty girl, but had never done anything like this before. So it was an eventful and long evening.

As the time went on, we decided to test the lighting in the shop so we took our "yearbook" picture as we called it. We actually took about ten, but this one really stuck a chord with me. I don't know what we were thinking, I know we weren't drunk because nobody drinks at Max's house.

The last picture as you can see is the "un-named girl" and Max doing some grinding in the background. I always had a camera in hand in those days so I took about sixty shots that day. I even got some shots of her friend "oiling" her up, (maybe I'll post those later) with some real grease from the shop. So rad! Such a tough job but somebody had to do it. That's it for today, but I'll be sure to post some stuff in the upcoming weeks. 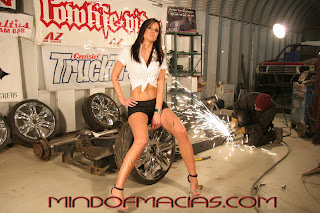 And I'm sorry to say that it won't be all minitruck talk in here, this is a blog after all, but for those of you who have been checking out the blog, be sure to leave a comment and say hello, let me know you stopped by. Thanks and see you soon!
Posted by Ernie Macias at 1:55 PM